A Look Back Thursday 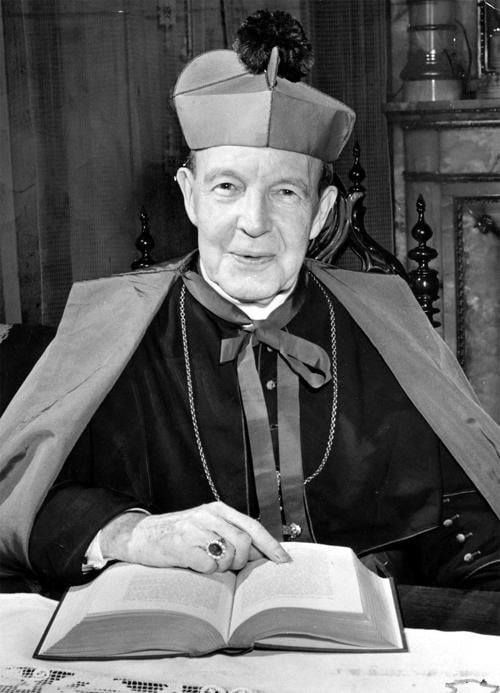 February 18, 1946 - 75 years-ago today, St Louis Archbishop John Joseph Glennon was elevated to Cardinal.
On Christmas Eve, 1945, it was announced that Glennon would be elevated to the College of Cardinals, but he originally thought himself too old to make the journey to Rome.
But he joined fellow Cardinal-elect Francis Spellman's flight, during which time Glennon caught a cold from which he would not recover. Deciding to stop in his native Ireland on his way back to St. Louis, he met with Irish President Seán T. O'Kelly in Dublin, & soon after fell ill.
Diagnosed with uremic poisoning, he died on March 9th, in the land of his birth, at the age of 83. The Cardinal's body was returned to St. Louis and buried at the Cathedral on Lindell.
He had been a priest for 61 years, a bishop for six days short of 50 years, archbishop of St. Louis for 42 years, & a Cardinal for 19 days. He had ordained some 4,700 young men to the priesthood, consecrated seven bishops, & celebrated mass more than 22,000 times.
Cardinal Glennon had long worked to establish a hospital open to all children in need. Cardinal Glennon Children’s Hospital, the only diocesan hospital for children, was created in his name. Affiliated with St. Louis University Medical Center, it would open in 1956.
Four leaders of the St Louis Archdiocese are buried at the Cathedral Basilica. Cardinal Glennon, Cardinal Joseph Ritter, Cardinal John Carberry, & Archbishop John May.

Sent by Msgr. Henry Breier on Thursday, February 18 at 9:21AM